The main chic's side chic part 1

- March 14, 2017
I had just gotten out of the toilet to the insistent ringing of my phone. I had heard my phone ring almost 4times but the candy crush I was playing wouldn't let me leave the toilet seat. No, I wasn't easing myself in anyway in there... I just needed to finish that addictive game, and without distractions... Especially from my mum. She just hates it whenever I play with my tablet or phone. She would barge into the room just to check what I was doing. That day, in had decided to spend "quality time" in the toilet. After checking up on me twice and seeing I was still there, she called out.
"Bia, Peace, ogini ka 'ina eme na toilet okembe otutu. Phone gi na e ringi la". (Come Peace, what r u doing in the toilet. Your phone has been ringing)
She actually believed I was pooing because my phone was on the table.
" I'm purging", I shouted back, faking a sound like I was really purging.
When I was sure she had left, I came out.
My phone kept ringing. It was a strange number. I don't usually save numbers, as I have almost all my contacts in my head (well, I'm numerically inclined). I quickly did a search in my head, but the numbet still seemed strange. I decided to pick and figure it out from the voice.
"Hello, good evening" I had answered.
"Good evening. Am I speaking with Peace"? I heard a female voice from the other end, in a rather harsh tone.
" Yes, please" I answered politely. It's not every time I get to receive calls from a female, especially a stranger. So I needed to sound nice. It could be work related or customer service... Lol.
"Peace, leave Michael alone"
(that's not his real name tho but I would rather use Michael. Dunno why I love that name sha).
" Leave my boyfriend alone. He doesn't love you. All those promises and sweet nothings he said to you are all lies. He would never leave me for you" she continued.
I was quiet, and my heart skipped a bit. I've heard stories of girls threatening other girls over a guy and I usually laughed it off but this is happening to me...
"Are you there"? She had asked. Probably making sure I was feeling her threats.
" Yes, please who is this"? I had asked.
"I'm Michael's girl, infact I'm his fiancé" she responded, pronouncing the "fiance" with some kind of accent.
"Fiance"? I asked.
" Yes, fiance..." She tried to continue but I cut her short. This was gonna be fun. I thought to myself.
"I thought " fiancé " is for the guy" I said, chuckling a bit.
I guess she didn't find that funny.
"You are stupid!" she blurted out
"See let me tell you. You have no idea whom you're dealing with o. Go and ask of " (she called her full names. I later checked her out on FB. An extremely beautiful girl, I must confess).
"I've been with Michael for 9years. We live together. He wakes up on my bed, eats my food. We've been thru a lot. So if you think you can just come and take all these away, then you must be joking. I'll find you and haunt you down, don't ever call him again" She kept ranting.
"Wow! 9 years! Girl, you are strong! Michael is wicked o, how can he date a girl for a whole 9years and still make her this insecure"? I had asked sarcastically.
" You are a fool" she cursed
"Makes the two of us" I replied.
She hissed and ended the call.
I tried calling back cos I wasn't done. She ignored and sent a msg "FOOL".
I decided to send a msg.
" How can you be with a man for that long and you're still fighting over him? Why would you allow him put you in this position? Girl you deserve better. I've known Michael for a while now and I must say he's got a good heart but 9years? Ha! That's wicked na. He tells me everything and he told me about you but he didn't tell me more. I actually have a boyfriend and he's cheated before but I wouldn't  go about calling or threatening a fellow woman. I don't know if your threats were supposed to scare me but I was rather amused. Don't worry, I'm going to call Michael now and lash out on him for putting you through this turmoil. I'll talk some sense into him. He needs to do the right thing by you. And I know he listens to me. You know that too, ryt? But really? 9 years? Come, babe, are you sure you're not exaggerating? Na wa o".
I sent the msg. Few mins later, she sent a msg
"Clown"!
I called Michael
" Mama Peace" he answered excitedly.
"Where are you, that place is noisy" I asked like a boss.
"Sorry ma, lemme shift" he replied.
He went to a more quiet place.
"What's up"? He asked.
Please send me airtime. I want to call and tell you something.
" Okay ma. How much"? He asked.
"1k". I replied.
" OK, give me some mins". He said
I ended the call.
Few mins later, a msg came. It was the recharge pins.
I smiled.
Continue to read part2 here>>http://www.peacedike.com/2017/02/the-main-chic-side-chic-part-2.html?m=1 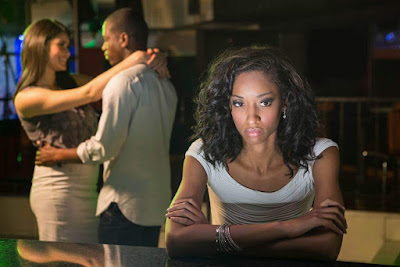