Being in the friend zone.

Being friend zoned is like sitting in front of a chef as he makes a delicious pie for you. Then at the last minute he decides that you can't have the pie. So you just sit there and stare at it. The longer you stay, the hungrier you become. The worse part is that other guys are allowed to walk up and stick their fingers in the pie, taking piece by piece of that delicious pie that was meant to be be yours. At this point, you know you should leave and forget about the pie; find something else to eat but no! Nothing could ever fill that hole in your stomach like the pie. So you hold onto hope that one day you'll at least get a taste.

The friend zone is a shitty and frustrating place to be. It is more commonly experienced by men than women, mostly because of the fact that men are comfortable with being in a relationship as friends. Men are very patient. They can wait as much as it takes to get even the last piece of the pie.

Being in the friend zone is like an employer turning you down for a job, then calling you regularly to bitch about the person they did hire.
Most times, people friend zone themselves thinking it's alright to be all nice and friendly without being emotionally attached; while others are just unlucky to be put in that area. Truth is, you shouldn't be where you don't want to be. Always make your intentions known. I don't know which is worse; keeping your love for someone a secret or letting them know and risk being rejected?

I'm actually tired of all these nice guys whinning  about being friend zoned. The reason you get friend zoned is because the girls who actually want you are the ones you disregard probably because they are not "hot" enough. Then you go for the "hot" ones and get burned up and you go about asking
"where are all the nice girls"? Duh! Dude, they are in the friend zone where you left them.

For the girls stuck in the friend zone, if that guy can't tell that you like him because he's too busy liking other "hot girls", maybe its worth it to leave that zone and find a guy that thinks you are worth it. And please don't go far finding that great guy. Start from the ones you've friend zoned.

Stop trying to set them up with your ugly cousins or friends. Give them a chance.. And thank me later. 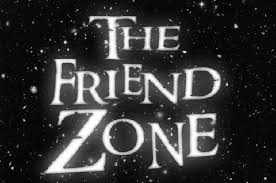