There's this belief that men lie more than women, but women lie better. A man is believed to lie 6 times more than a woman. An average man can tell lies like "I was with James... Oh! You can call him and ask", " What? You think I'm lying"? All in one sentence, whereas he's been with some other woman. But a woman will just tell a lie like "I'm pregnant and it's yours", and that's all.

Well, I've listed out 8 definitive ways men lie.
1. He can't look in the eyes when he lies.

2. He looks straight into your eyes and soul and lies!

3. He mutters when he lies.

4. He speaks loud and clear so the lies can register in your head.

5. His head hangs down like someone feeling guilty about lying.

6. He holds his head high like he doesn't feel guilty about lying.

7. He smiles and becomes playful when lying.

8. He frowns and becomes aggressive when lying.

That way, they won't expect it and you'll be more accurate.
Oh! Don't thank me... What are sisters for? 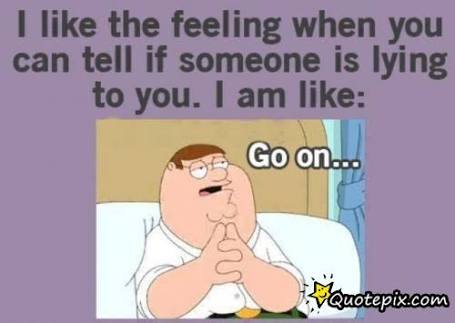