20 weird relationship facts nobody told you about.

I think sleeping around is the best way of meeting people... And new diseases.

The best birth control is just to leave the lights on... Quote me!

Some people can have a happy blind dating for years... Until they meet.

Anyone who says he can see through women is missing a lot. You need to go deeper.

You'd be surprised how it costs to look cheap and simple.

Men usually ease off stress by looking at big boobs.

Relationships can be a handful... But that's why you've got two hands.

Most people that give relationship advice are still single.

Love is like a fart, if you have to force it... It becomes shit.

Marriage is a relationship where one is always right and the other is... The husband!

Love can either make you to live or leave life.

Everyone has that one ex they don't want the world to know they ever dated.

Marriage is a workshop where husbands work and wives shop.

Most women lose sleep when they realize something bae said didn't add up.

There's this one person a girl texts when she's broke.

Stop waiting for prince charming. Get up and find him. The poor boy might be stuck somewhere.

Most times, the person you really want to be with is usually far from you. 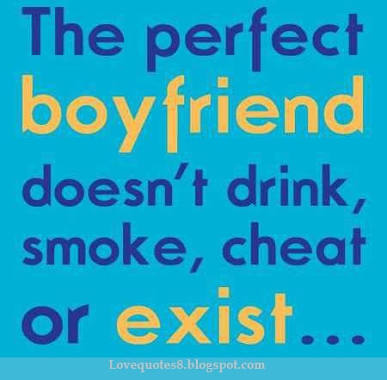