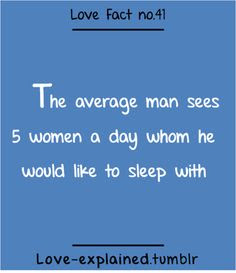 5.   Smoking causes impotence in men.Hope you quit smoking after reading this.
Do you know that men were the first to wear high heels, women began wearing them to look more masculine.
6.   Studies show that unfaithful men have lower IQ’s.
7.  It is funny to know that men spend almost a year of their lives staring at women.
8.  Men lie 6 times a day on an average, where as women lie 3 times a day.
9.  After a bottle of champagne, they start licking faces.  It makes you want to punch them and kiss them all at once.
10. Most men own three pairs of shoes.  Tops.  Don’t ask them for fashion advice. It isn’t going to happen. Unless you’re naked.
11. Don’t ask them what they’re thinking. Men can think about nothing for hours
relationships